Well, it had to happen some day, that most books on such Federation topics are now collectors' items.

These are the books that will be most helpful. More details will be added as they become available.

From Wikipedia:
Appian Way is a street located in the suburb of Burwood in Sydney, New South Wales, Australia.
The state heritage listed Appian Way has been described as one of the finest streets of Federation houses in Australia. The picturesque houses create an asymmetrical, multi-gabled roofscape with a variety of materials used such as slate and terracotta tiles and feature varied designs. The houses are complemented with landscaped gardens, lawns and a nature strip with Brush Box trees. The serpentine street runs between Burwood Road and Liverpool Road with a communal reserve that has been converted into a lawn tennis club.
Homes in the street are designed in various Federation styles. Many are in the Federation Queen Anne style, but other styles are also represented. Erica and St Ellero are designed in the Federation Arts and Crafts style, while Casa Tasso and Ostia are just two out of several examples of the Federation Bungalow style.[1] More at Wikipedia:

Also known as the Hoskins Estate, Appian Way was a model housing estate conceived by a wealthy industrialist, George J. Hoskins on 8 hectares of land that he purchased at the start of the 20th century. More at Wikipedia: 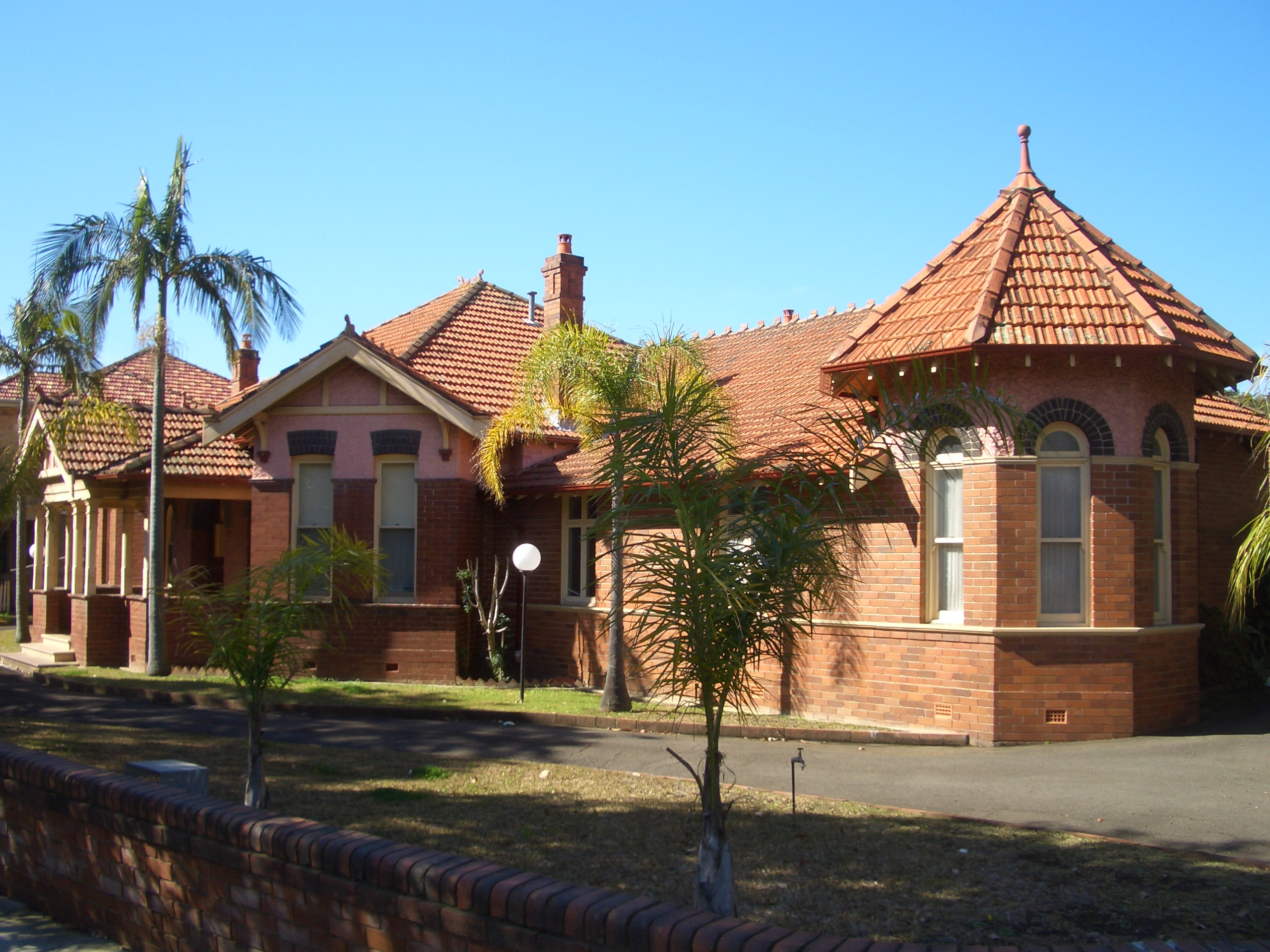 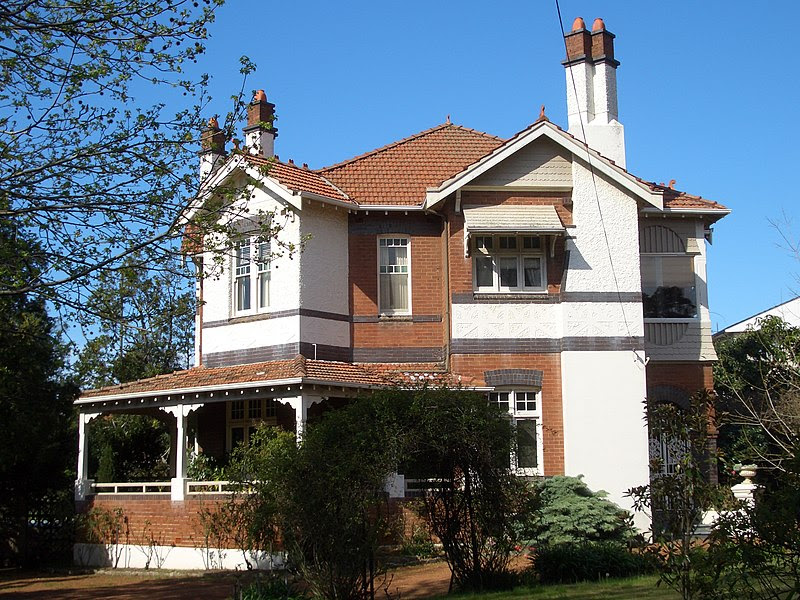 Typical Federation style, however chimneys are quite special, because they are not square with the frontage on the right. 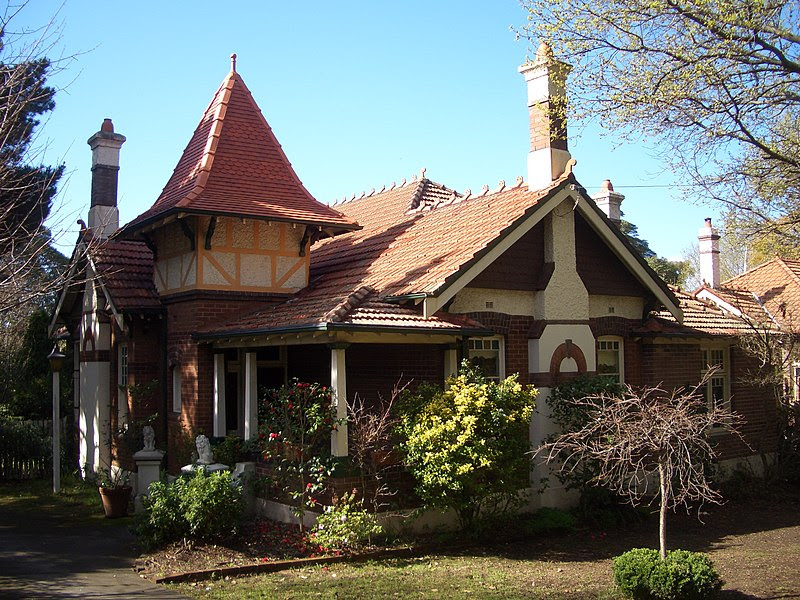 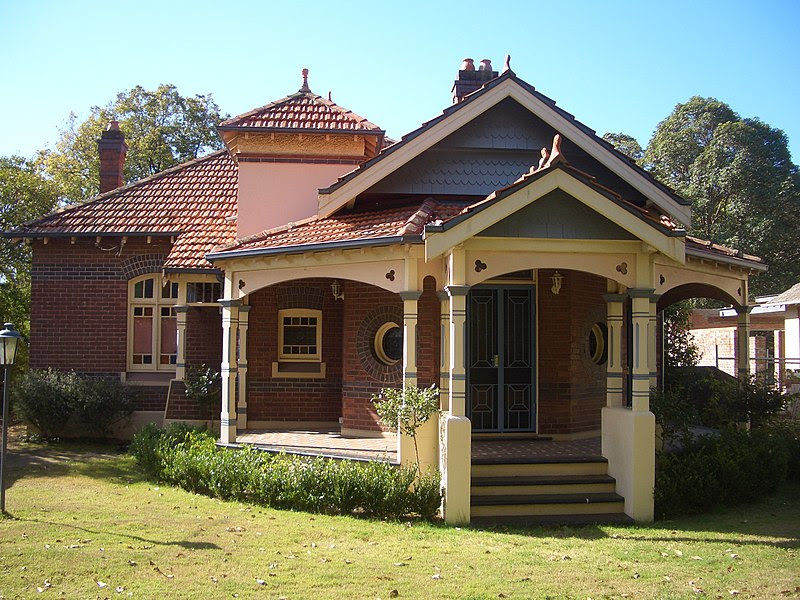 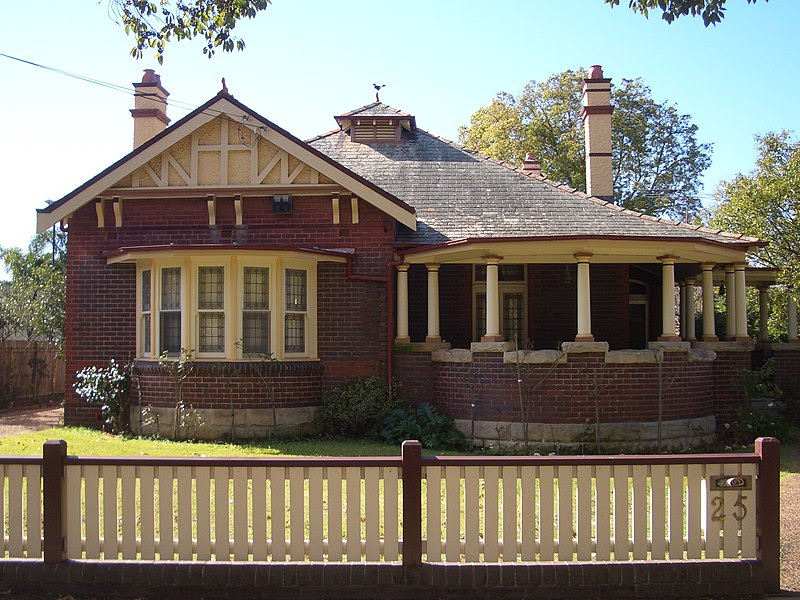 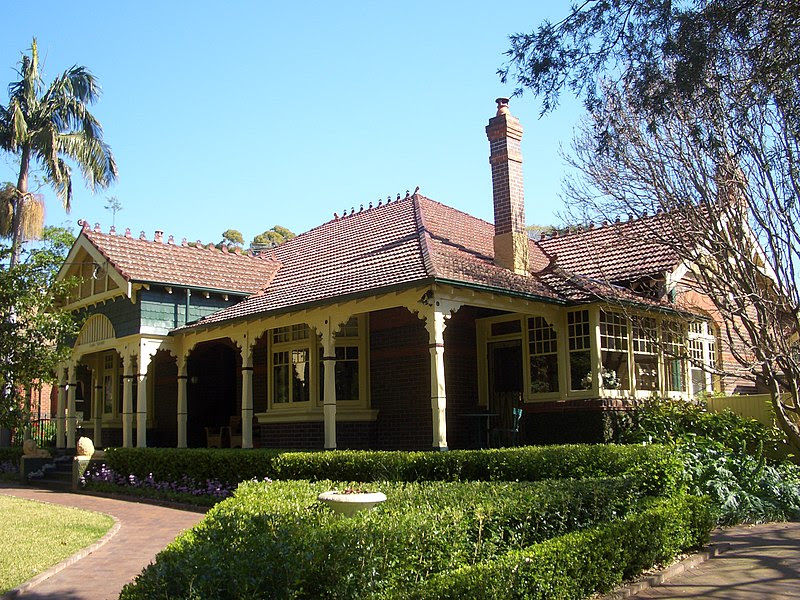 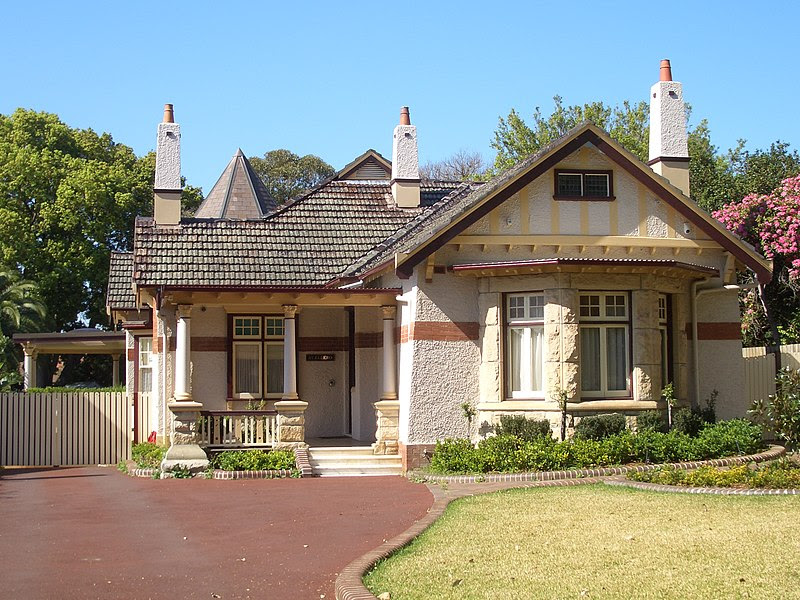 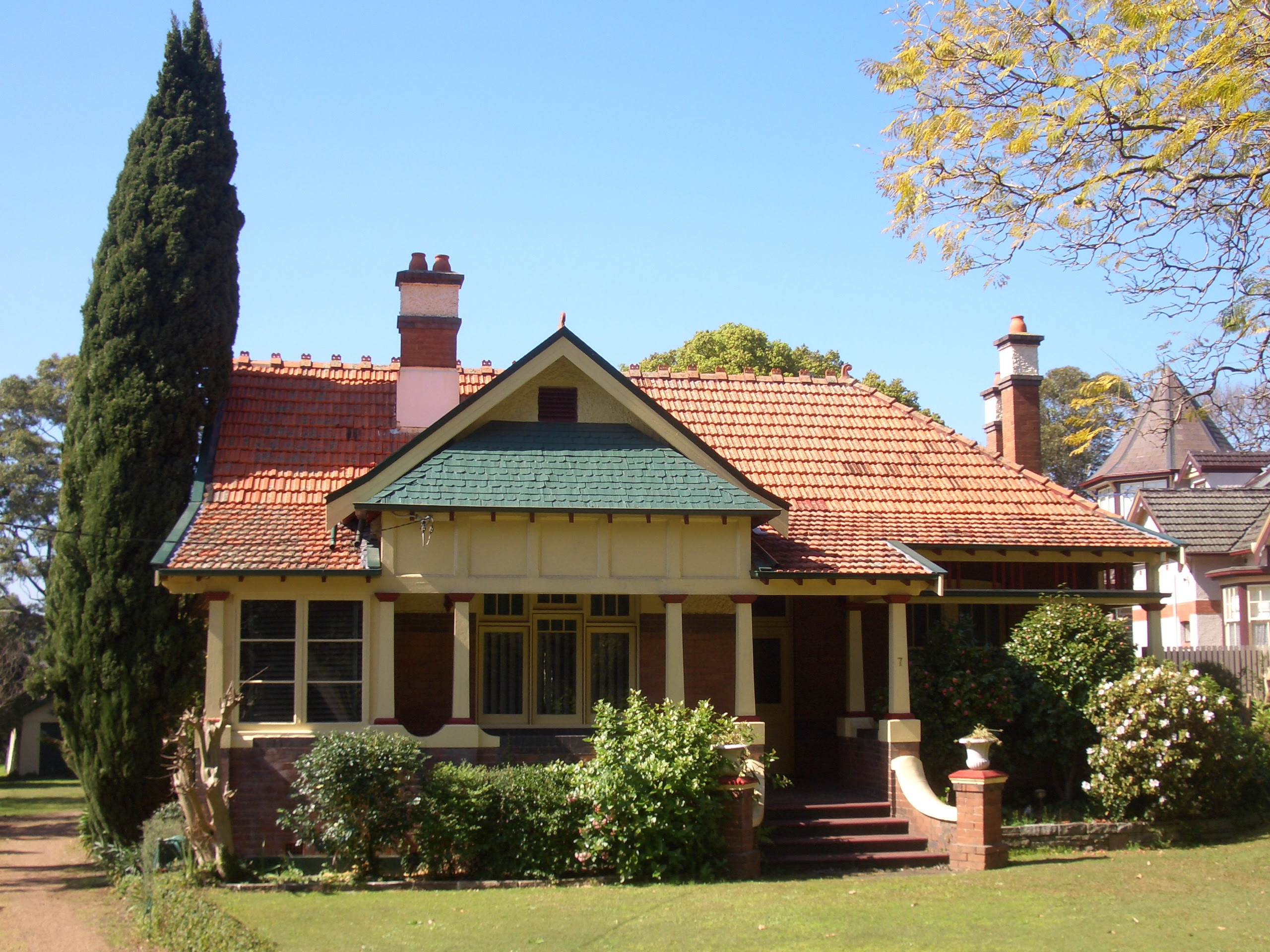 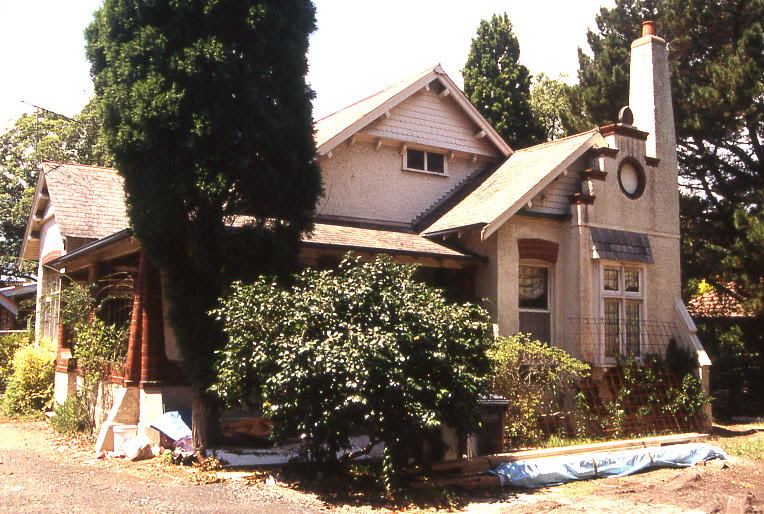 Erica, also in the Arts and Crafts style 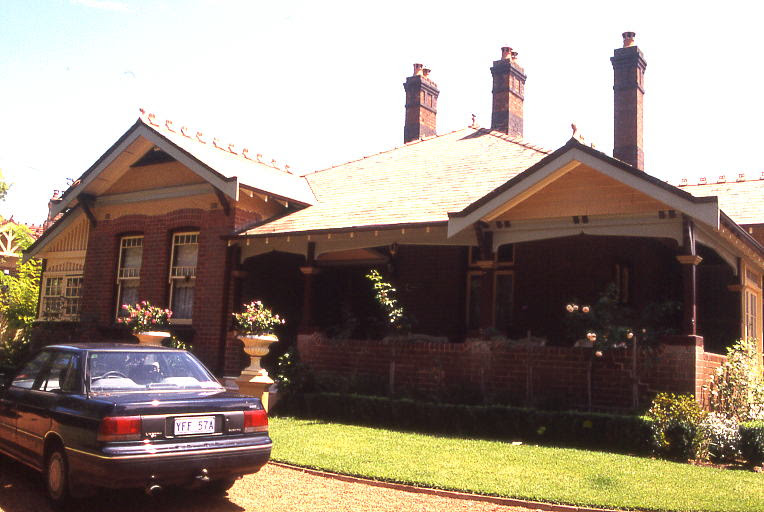 Ostia, another Federation Bungalow, with extensive verandah and hipped roof-line. 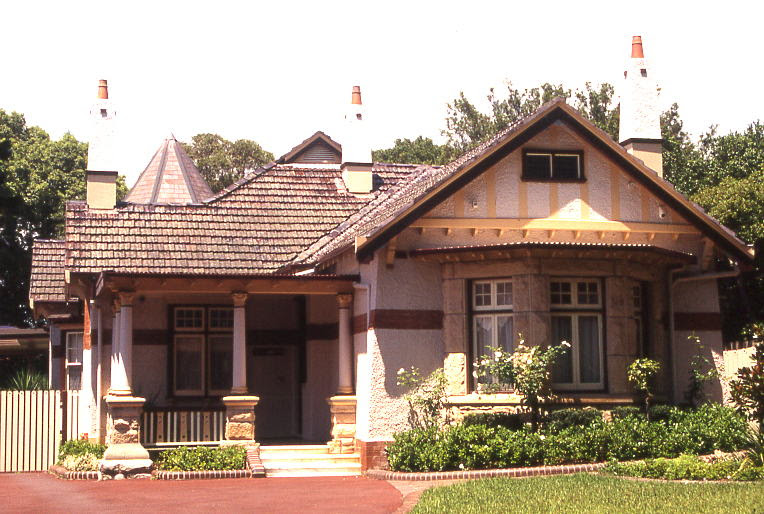 St Ellero, a home in the Federation Arts and Crafts style
on April 14, 2010 No comments: Links to this post

Iconic Burwood house to be bulldozed

A majestic early 20th century house in Burwood Heights will be demolished after a last-minute plea to protect the building as a heritage item failed this week.
A 40-day emergency protection order on Tilba, a large, two-storey Federation-style house at 92 Liverpool Rd, ended on Tuesday and no extension was granted by the Planning Minister Tony Kelly.
Urban Apartments director George Elias, who bought the 1650sqm block last year, was granted approval by Burwood Council to bulldoze the house last December but had to halt this when the emergency order was granted to allow for an assessment of Tilba.

A spokesman for Mr Kelly said officers from the Planning Department’s heritage branch had found Tilba was ``not of state heritage significance’’ and no interim heritage order would be granted which would have protected the house for another 12 months.

Burwood District Historical Society president Jon Breen, who has been at the forefront of a campaign to save the house, said he was ``pretty gutted’’ by the decision.
Burwood Mayor John Sidoti was planning to call an extraordinary council meeting for Wednesday night to discuss the house.

“We’re looking at advice at what we can do,’’ he said.
“It’s just totally wrong. Once an item is gone, it’s gone. It’s sad.’’
Mr Elias, who bought the house and land for $2.8 million, said he was pleased with the decision.
“I never expected to have a clear run,’’ he said.

“I expected a few hiccups because this place has been painted and renovated nicely.’’
He said the previous owner and representatives from the Planning Department visited the house last Monday to assess the possible heritage value of the building.

“(The previous owner) changed the floorboards, the chimney, ceilings, the balcony, the fireplaces,’’ Mr Elias said.
“So basically, the place was changed. He renovated it to suit his taste and lifestyle.’’

Mr Elias said he would not be sending in the bulldozers this week.

“No, there’s no reason, no rush to knock it down tomorrow.’’
He said he had ``no plans yet’’ for the site and has yet to lodge a development application.
“I’d like to work with the community rather than find a reason to create animosity.’’
Strathfield State Labor MP Virginia Judge said she would be following up the issue.
“I will be asking Burwood Council some serious questions as to why this property was not placed in a conservation zone,’’ she said.

March 22, 2010
Tilba, the 1913 Edwardian-style Burwood Heights residence, faces demolition. Its new owner, the developer Farah Elias, wants to build a three-storey unit block.
Its fate rests with the Planning Minister, Tony Kelly, who has given Tilba a 40-day reprieve to assess its heritage merits, following public concerns expressed through the local member, Virginia Judge.
Tilba represents an early skirmish in the unfolding battle across Sydney between those who want ever more housing and those who seek to preserve what we value.

Virginia Judge ... fighting to save Tilba from demolition.
It is among hundreds of worthy houses that at the very least contribute to the character of the suburb. Many would argue that it does more, and ought to have been listed long ago by Burwood council on its local environment plan.

But Tilba, and many like it, face the prospect of virtual overnight demolition, now that private certifiers are allowed to approve demolition and development, all without notifying neighbours.

This has been allowed by the heritage and planning laws, initially sought by the then planning minister Frank Sartor in 2007, which passed through Parliament last year under Kristina Keneally's stewardship.
The five-bedroom Liverpool Road house that sits on a 1650-square-metre block sold last November for a record $2.8 million. Most people inspecting it assumed its meticulous restoration would lead to a new family taking up residency, following in the footsteps of its first occupant, produce merchant Alfred Berwick.
Tilba sits on the ring of properties surrounding one of Sydney's most renown streetscapes, the National Estate-listed Appian Way.

Appian Way was a model housing estate conceived by a wealthy steel industrialist, George Hoskins, who turned eight hectares of land known as Humphreys Paddock into an estate of 36 spacious, low-set bungalows surrounding a village green. Its development coincided with the garden city movement, the urban planning approach founded in 1898 by Sir Ebenezer Howard in Britain.

About 30 of the original houses still stand within the Appian Way.

While the Appian Way is somewhat protected, surrounding houses have no such surety. Indeed, the last comprehensive heritage study undertaken by Burwood Council was in 1986. Only about 250 of its 5500 houses are on its heritage list.

Many other councils have similarly neglectful heritage lists, which often involved little more than a survey done from behind a car windscreen some three decades ago. These were done shortly after the National Trust hit its strides after the Wran government's 1977 heritage legislation.
Camden, which has the pioneer spirit deep into its veins, protects just 100 properties. Only 120 houses are protected across the Cooma-Monaro shire.

Hunters Hill ranks among the thorough councils, with almost 600 properties on its list, along with Ku-ring-gai's 700 and Woollahra's 800.

Jon Breen, the president of the Burwood Historical Society, is hoping for a mayoral minute from John Sidoti, and council support at tomorrow's meeting, which might just help save Tilba
on April 09, 2010 No comments: Links to this post