One of the great houses of the inner north, one of the rich stories of residential Melbourne.[Previous Post: Deltroit Station, Gundagai NSW .... Next Post: ]
Featured in an article by Lou Sweeney Domain Reporter Jul 23, 2016:


House of the Week: Prepare to be awestruck

"We need to talk about Lugano, one of the great houses of the inner north, one of the rich stories of residential Melbourne. 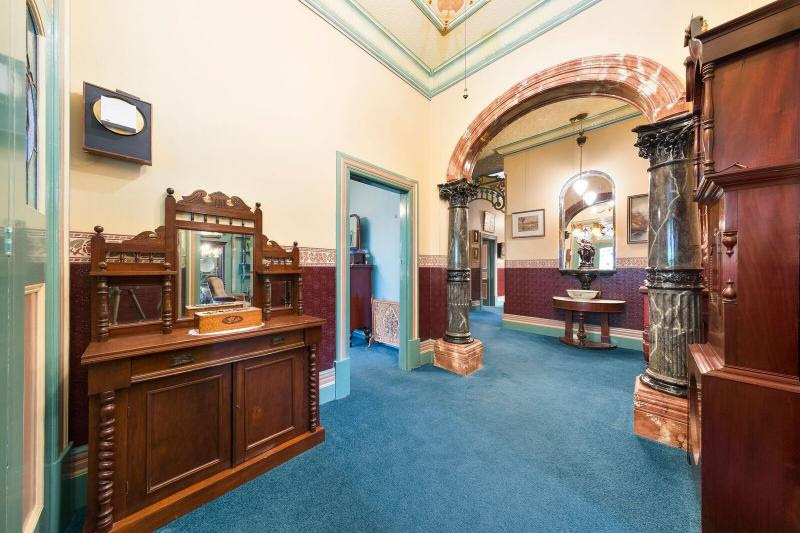 While the foyer’s columned archway is a suitably stunning introduction, you only have to jag left where bedroom one immediately ups the ante. It’s here you see the first of the incredible pressed metal ceilings. 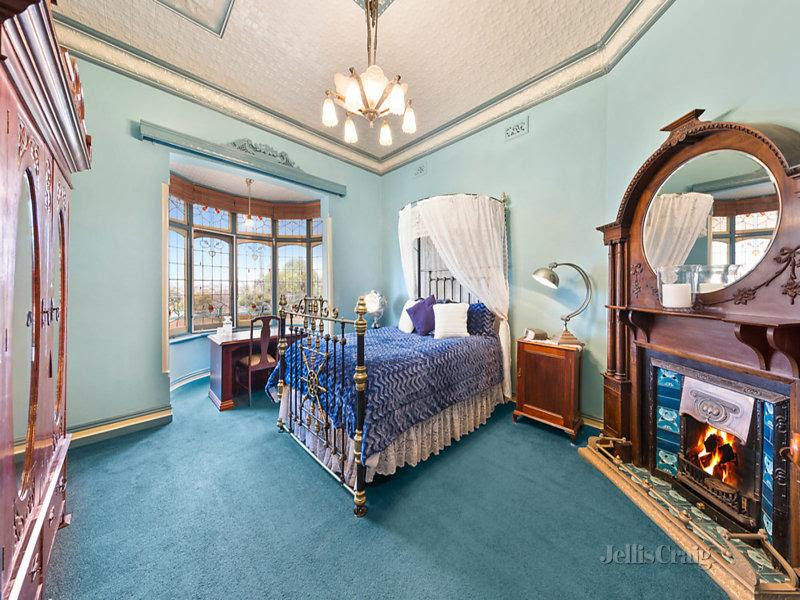 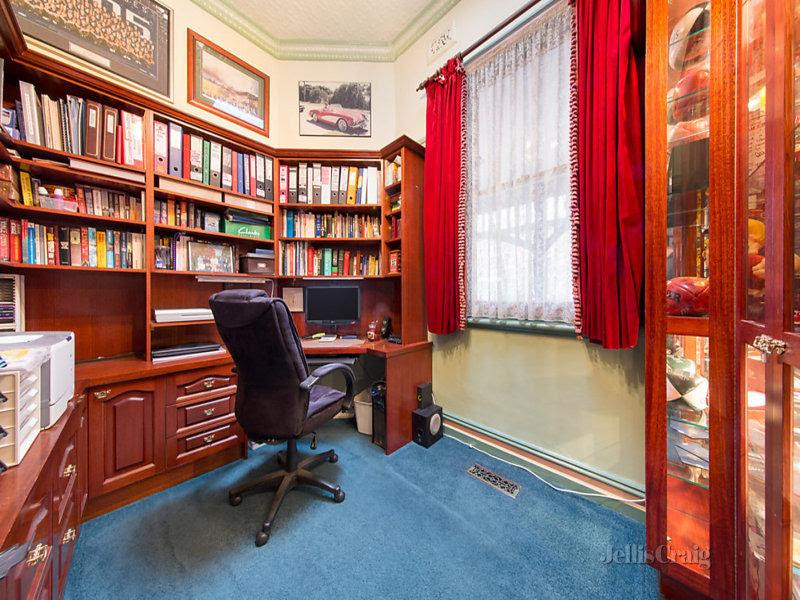 It keeps getting more remarkable as you go beyond the arch to the fine timber study and then two further bedrooms, the main showcasing a lovely tulip motif ceiling and excellent en suite. 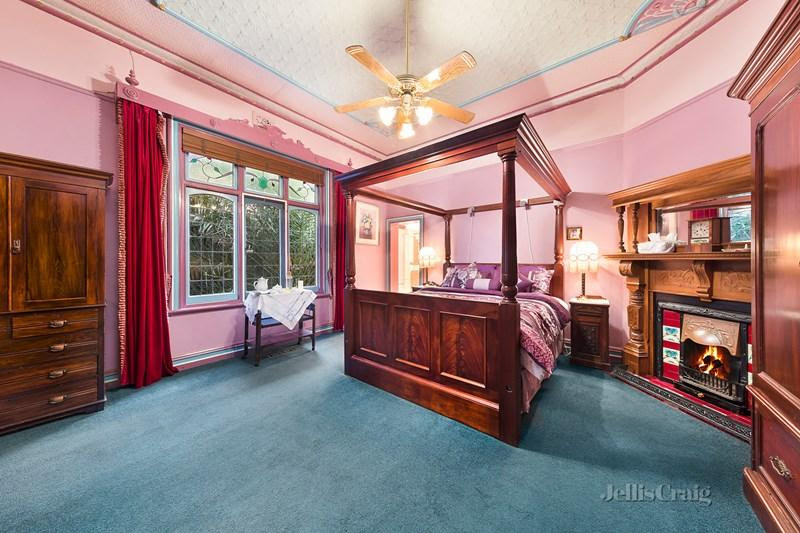 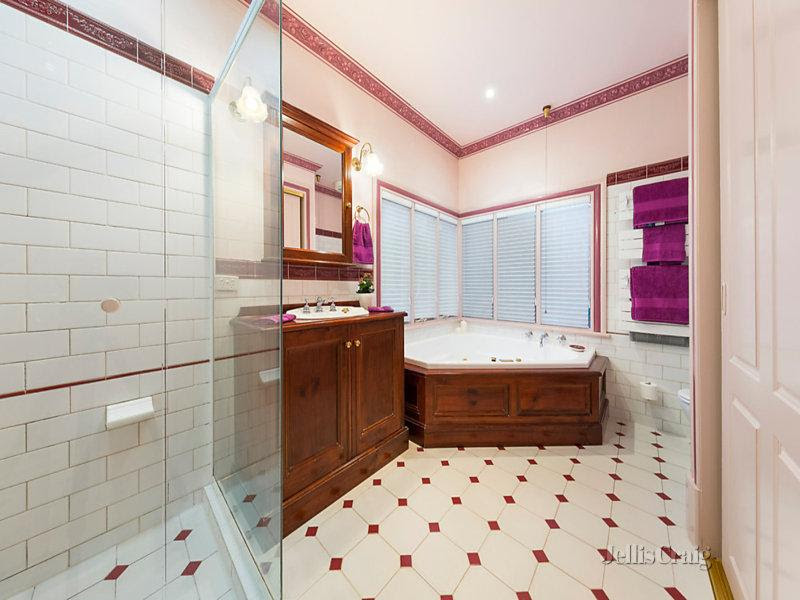 "We really need to talk though, about the formal sitting room, the grand ballroom, the timber attic and the widow’s walk.

From the Weekly Review by Alison Barclay, July 13.2016 4:40 pmIts Queen Anne architecture, with a widow’s walk, turret, bay windows and a grand staircase from verandah to driveway, clearly has lasting appeal for inquisitive kids. In 1990, the grown-up Taig saw an ad for Lugano.
He and his wife restored it, reproducing the original paint colours – rose pink, cream and duck-egg blue – and tracking down an expert craftsman, aged 100 and still working, to repair the pressed-metal ceilings.
Mr Taig’s efforts to restore the home were rewarded when the granddaughter of the original builder, Laurence Edwards, showed him a photo of her grandparents’ golden anniversary party that was held at the home.“I was happy to see that I had achieved a result that was pretty close to the original,” Mr Taig said.

This sensational historic residence (1912) is Northcote's most magnificent example of the Federation style, on a vast landscaped block with a 2nd street frontage and breathtaking views from the Dandenongs to the CBD. 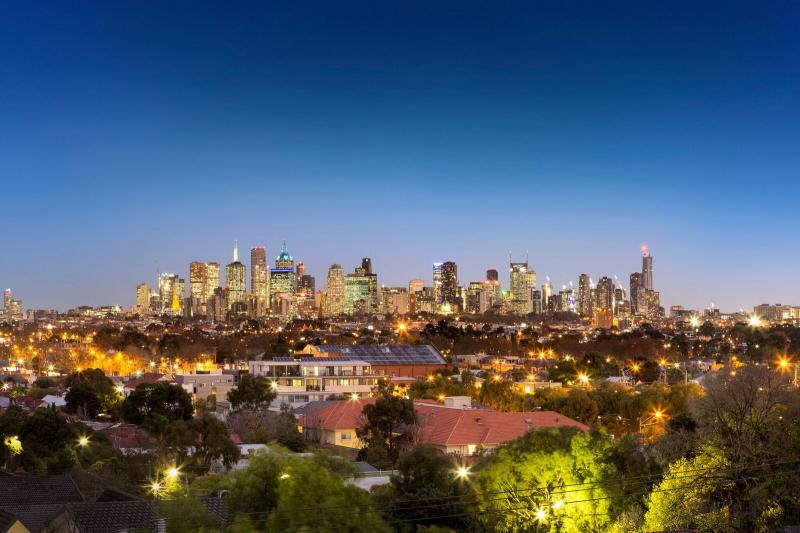 
[Previous Post: National Trust Tasmanian Heritage Register 12 .... Next Post: Deltroit Station, Gundagai NSW]
William Mark Nixon was born in Sydney about 1860, the son of William Nixon and Jane (née Graham), who came from Hawick, in the Scottish Borders.The elder William arrived in Australia with £30,000 from the family woollen mills but lost most of it in gold mining investments.
In 1904 William purchased three lots on the southern side of Malton Road and erected ‘a magnificent new villa residence’ to his own design.'Lynwood' was of brick and tile, of the new ‘Federation’ style with a sunny north-eastern corner bay.

William had earlier purchased three blocks of land opposite his home and in 1910 began building his second Beecroft home.
William Nixon was President of Hornsby Shire in 1908 and 1909, having been President of the Beecroft Progress Association the year after he made his home in the suburb.
Gardening was one of William’s hobbies. Appropriately, he was first President of the Horticultural Club founded in 1910 and was responsible for the planting of roses in the station garden.[4]

As often happens with such people who are active and vocal in local committees, William Nixon had differences of opinion with his committee friends. After a long discussion in 1917 about the site of the proposed Honour Board to local servicemen, the Cumberland Argusreporter wrote: Photography was another of Nixon’s hobbies and he did his own developing and printing when cameras first became popular. He also built an early crystal wireless set which caused some excitement in the family and neighbourhood. Many of the solid, well built homes of Beecroft and Cheltenham were designed by William Nixon, in various styles according to their owners’ taste. Before coming to Beecroft he had had wide experience in house design of the ‘Queen Anne’ style (or ‘Federation’ as it came to be known later).  The building contractor who often worked with Nixon’s firm of architects was Arthur Slingsby, who also made his home in Beecroft in 1903.[6]In Beecroft William Nixon designed the second St John’s Church in 1907 and the Presbyterian Church in 1908.[7]  In 1921 the Nixons sold their second home in Malton Road and moved into the smaller one alongside, which had been designed by their son Charles in 1910 and then leased. The name ‘Lynwood’ moved with them.
Section 2. Items listed under the NSW Heritage Act.
Your search returned 2 records.

(01763)
As the adult home of Grace Cossington Smith and the subject of many of her finest paintings, Cossington is of State heritage significance for its association with this outstanding twentieth century Australian artist.
Cossington is also of local heritage significance -
"I am not sure there is another artist in the entire history of Australian art for whom there can be the same two-fold association of firstly, a house in which the artist lived for entirety of a career - more than six decades - and secondly, where the interior structure itself - ie the rooms inside - formed the basis of subject matter pursued with magnificent and profoundly spiritual dedication over that time."
(Barry Pearce, 2006)

"Highbury" (01719)
The house, built in 1913, represents an example of a Federation bungalow designed by the prominent Sydney architect, William Nixon, which forms part of the planned, high quality residential precinct of Centennial Park from the Federation era. The building also represents a fine example of modern 1960s interior conversion.
The house, interiors and gardens provide a rare and remarkably intact record of the writing environment, lifestyle, inspiration, tastes, activities and interests of Patrick White at the peak of his career from 1964 until his death in 1990.
Section 3. Items listed by Local Government and State Agencies.
Your search returned 16 records.

The Bank of China, formerly the Savings Bank of New South Wales, is a three storey building of Federation Free style located on a prominent corner within the National Trust's Haymarket Conservation Area.
It has historic significance as an important building in the professional work of the noted architect J B Adam.

The Gundagai Boer War Memorial demonstrates the skills of Messrs Nixon and Adam, architects, who designed it and Messrs Ross & Bowman, sculptors and stonemasons, who fabricated the monument in Carrara Marble in 1903.

A fine example of a large city mill, built during a period of rationalisation of the milling industry. Its location in close proximity to the city and major transport arteries, with rail access and a private siding, reflects the economic forces affecting the industry at the time of its construction.

The Commonwealth Bank Building, formerly Savings Bank of NSW, is a four storey stone building of Victorian Academic Classical style constructed in three stages. It is located fronting Barrack Street formerly Barrack Square. It has high historic significance as the first Savings Bank in Australia and has continued in use as a bank. The building has historical significance as an important work in the professional careers of mid-nineteenth century architect Henry Robertson and of noted architect George Allen Mansfield, principal of the firm Mansfield Bros.

A federation villa which relates well to other houses within the Ku-ring-gai Avenue Conservation Area.
The planning of the house features rooms which can be opened to form a large space for Quaker meetings.
Single storey red brick construction with slate roof.
Tall brick chimneys with elaborate strap work.
Cast iron verandah supports not original (National Trust).

This home was designed by William Nixon as his family home, after his earlier home in Beecroft (‘Lynwood’) became too large. In 1921 the home was sold to Charles Robertson Swann (1880-1946) of ‘Kunaware’ Hannah Street Beecroft. The name is an Aboriginal word for ‘swan’s nest.’
Robertson Swann was a member of the New Guard and of the Freetrade and Values League. He was an avid book collector. His wife was also a collector, and had a large collection of tea pots.

This land had been owned by Robert Henry Carter and Robert Fowler MLC before being purchased in 1904 by Ada Nixon the wife of William Mark Nixon.[2] William Nixon was an architect and he designed the house built on the property as their family home. As the family started to leave home, the Nixon’s sold the home and built a new home across the street – now known as ‘Kunaware.’ This property was purchased in 1911 by Mary Bell North, the wife of John George North, stockbroker.
Heritage Listed Item Federation Bungalow Built Date: 1903 Designer: William Nixon
Statement of Significance: Impressive two storey Federation residence designed by William Nixon. Complex plan and original wrap-around
verandah. Good condition. Later additions mostly sympathetic. Local significance.

Carinya is significant as an excellent, highly intact and well-detailed Federation bungalow with some Arts and Crafts styling, designed by noted architect William Mark Nixon. The house retains a substantial garden setting with mature plantings and manicured lawns. 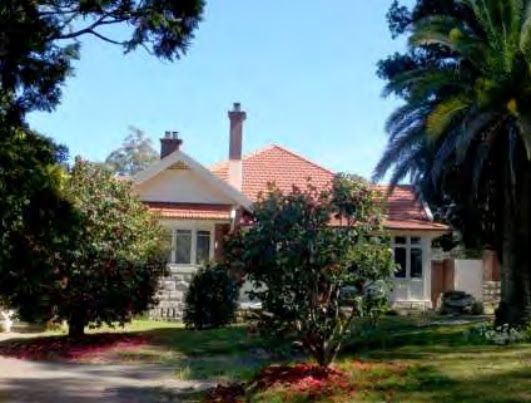 Deltroit Station, one of the finest properties on the NSW south-west slopes,
Set east of Wagga Wagga in Mundarlo, midway between Sydney (409 kilometres) and Melbourne (474 kilometres), it comes with a 1903 Federation brick homestead designed by Sydney architect William Nixon along with a stone-built, modernised four-bedroom Cobb and Co. coaching inn, The Junction Hotel. 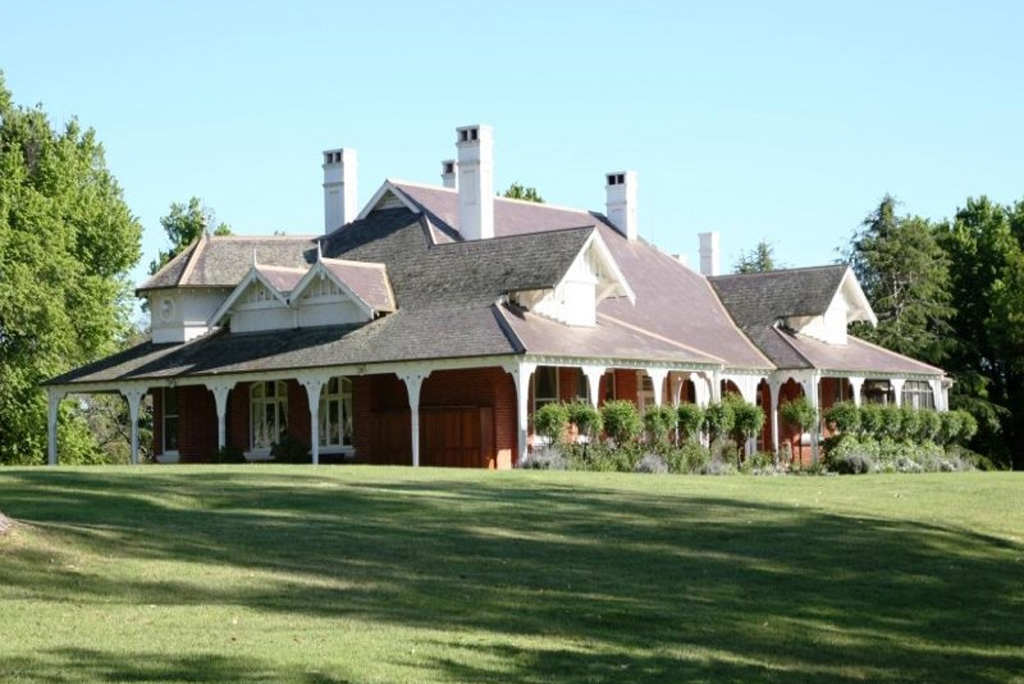 A fine example of Federation architecture, Deltroit’s magnificent five-bedroom homestead (with about 890 sq m of living space) stands within six hectares of gardens with a tennis court and 19-metre heated swimming pool.